This browser is not actively supported anymore. For the best passle experience, we strongly recommend you upgrade your browser.
All Posts Subscribe
November 23, 2021 | 3 minutes read

Weighing up the ESG impact of cryptocurrency

2021 has been hailed as a breakthrough year for cryptocurrency, with soaring levels of interest from investors, the media, and the public. In October, the value of a single Bitcoin (the world’s largest cryptocurrency) reached more than £45,000, a 12,300% increase on five years ago.

2021 has also been a breakthrough year for environmental awareness. With COP26 dominating the global news agenda, institutions now face unprecedented pressure to do business more sustainably.

Given the serious environmental concerns about cryptocurrency, are these two trends on a collision course?

The environmental impact of cryptocurrency mining

Environmental concerns relate to two areas. One, as we have discussed in a previous post, is hardware waste. To take Bitcoin as an example, superfast processors known as ASICs (Application Specific Integrated Circuits) are used to mine the cryptocurrency. They serve one, very specific purpose, and once they’ve outlived their usefulness, they are discarded.

The other major issue is the computing power required to process transactions and ultimately create new Bitcoin. Tim Berners-Lee, inventor of the World Wide Web, has described Bitcoin mining as “one of the most fundamentally pointless ways of using energy.”

Bitcoin runs on a proof-of-work (PoW) protocol, meaning every miner in the Bitcoin network is tasked with verifying transactions. The first miner to solve a complex mathematical problem gets a transaction fee and earns a new coin.

Requiring Bitcoin miners to invest so much time and computing power into each transaction is intentional, as it helps to prevent fraudsters attacking the network. The downside is the incredible among of energy involved. It is estimated that in 2021 a single Bitcoin transaction uses the equivalent power the average US household would use in nearly two months.

Sustainability isn’t the only concern when it comes to cryptocurrency. While the use of a common, decentralised ledger system increases the transparency and security of transactions, cryptocurrency is often used as a medium for exchange by criminals. Ransomware attackers, for example, will frequently demand payment in Bitcoin – as was the case in the high-profile attack on Colonial Pipeline in the US.

How should institutions respond to cryptocurrency’s sustainability challenge?

Some would argue the most meaningful solution to this problem has already been delivered. China, once the global epicentre of cryptomining, effectively banned the practice earlier this year, taking half the world’s Bitcoin miners offline virtually overnight. This resulted in the permanent shutdown of a lot of older, less efficient machinery.

Many miners have since migrated to more environmentally sustainable power sources. As Mike Colyer, CEO of Foundry, recently explained to CNBC, “the Bitcoin network is ruthless in its drive for the lowest cost. Miners around the world are looking for stranded power that is renewable.”

Criminal activity involving cryptocurrency also seems to be declining, with one report suggesting that illicit activity accounted for just 0.34% of all cryptocurrency transactional volume in 2020, down from 2.1% in 2019.

While these are welcome developments, there is no escaping the fact that the PoW protocol, which Bitcoin and many other digital currencies continue to rely on, is having a damaging impact on the environment.

Institutions themselves should think about how they can live up to their own ESG aspirations. Aside from assessing whether the current world of cryptocurrencies fit with their ESG goals, they also need to consider how they can influence the direction of travel for the wider market. For example, this could involve encouraging (or leading) investment in more efficient currencies, such as those that use the proof-of-stake (PoS) algorithm instead of PoW. Under PoS, miners are only able to mine a percentage of transactions that corresponds with how many coins they own, which significantly reduces the need for computing power and therefore energy consumption. A number of cryptocurrencies already use PoS, and Ethereum, the world’s second largest cryptocurrency, plans to switch to PoS in 2022.

Ultimately, institutions need to understand both the potential advantages and pitfalls of this technology and the way it is applied. While cryptocurrency is unlikely to fade away, neither are the concerns around ESG.

Institutions themselves should think about how they can live up to their own ESG aspirations. Aside from assessing whether the current world of cryptocurrencies fit with their ESG goals, they also need to consider how they can influence the direction of travel for the wider market. 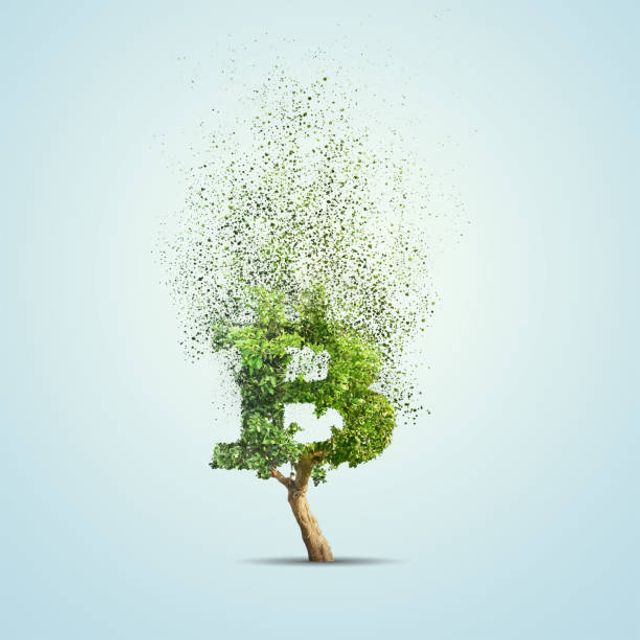